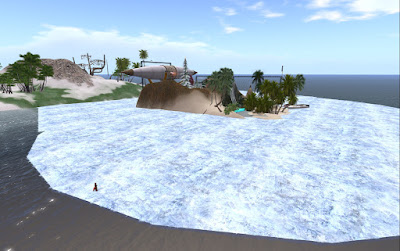 Winter has come to the Sunweaver Estates. Shockwave Yareach, a noted builder with accomplishments such as various Relay Weekend campsites, who owns Sunweaver Eclipse informed the Newser the place had recently taken on a look of ice and snow, suggesting it was not exactly deliberate, "My freeze ray has rendered my hot tropical island a winter wonderland. Had a we bit o trouble with the liquid nitrogen. Sadly the ray was supposed to defrost hot dogs.  But oh well."

Dropping by, the sea around the island was indeed iced over.  One could walk around the place without falling through to the sea floor. Perfect for skating, if one had some skates. The ice extended to the SunWater Three sim, so one could walk or skate between the two islands, or north of the larger one. The middle of the Eclipse island also had some snow, and some winterized and Christmas trees, as well as some decorations.

But this wasn't all. Later Shockwave messaged me of a new development out of a "Calvin and Hobbes" comic plot, "Oh no!!  Roving snowgoons have invaded my sim!!" It turned out he wanted to see what would happen if he put a little code in some snowmen. But the results, not unlike with Calvin, didn't exactly go to plan as he now had a mess of scary snowmen crawling around, "Now they roam my sim."