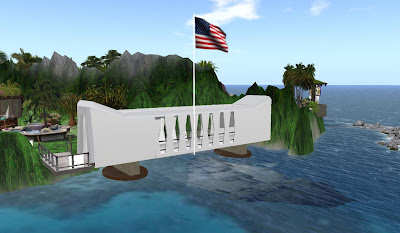 This Memorial Day, while there are a number of places to visit to reflect on those whom died in service to the American military, the USS Arizona Memorial is not among them. The Oahu sim where it was located was offline, and while it's still listed in Search, recent traffic registers as zero. The sim has been taken offline. Unless the sim owner can bring the place back online, it seems the memorial to the famous battleship sunk at Pearl Harbor joins the Vietnam Veterans Memorial, which went offline sometime in 2011, among those noted places in Second Life now visible only through past records.

The USS Arizona Memorial, a replica of the real-life memorial in Honolulu Hawaii, has been in Second Life for several years. On December 7, 2011, there was a memorial service to commemorate the 70th anniversary of the Japanese Empire's attack, which resulted in America's entry into the Second World War. The remainder of the sim was a Pacific island themed residential area in which visitors were free to relax on the beach.
Posted by Bixyl Shuftan at 2:00 PM