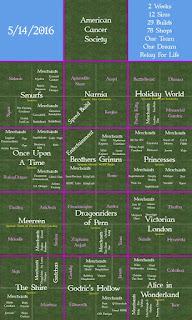 All year long a group of builders have been working hard towards one goal: to compete in the Third Annual Castle, Home and Garden Contest! Spanning across 12 sims, there will be 28 teams competing to win Best in Show for two categories- Best Castle and Best Home and/or Garden. During the week individuals will have the opportunity to explore and admire the builds while the esteemed judges will evaluate and determine a winner. The 1st Place Castle will get $L100,000 to their team, and the 1st place Home and/or Garden will get $L100,000 for their team. In addition to this, they will have what's called a Popular Vote. The Popular Vote entails a kiosk being in front of all builds and the build with the most linden in their kiosk wins the Popular Vote. The winner of the Popular Vote will get an additional $L50,000 linden to their team.

An event that has raised over $L800,000 for the American Cancer Society before even opening its doors, it will offer an astounding number of merchants- 79 stores will be set up across 12 sims. Merchant listing can be found here (http://www.chgrfl.com/#!our-merchants/wok2c). We have merchants that span across all sorts of shopping- breedables, fashion, furniture, medieval and fantasy huds, and much much more!

"Once Upon a Hunt", a hunt featuring 50 plus items, will run throughout the two weeks. Each builder will have a dance or event at their build promoting their build and their Popular Vote Kiosk. The schedule can be found here ( http://www.chgrfl.com/#!schedule/kg5w5). Two speed build contests, an Opening and Closing Ceremony, a Snail race, concerts, and the hunt are key features of the schedule.

Come explore the 12 sims- journey across the land of the Smurfs, join Aslan in the chronicles of Narnia, enjoy some merry shopping in Holiday World, believe in magic on Once Upon a Time, take a tale far far away in Brothers Grimm, join Snow White Anna and Rapunzel on Princesses, go to the land of the Mother of Dragons on Meereen, join the dragons on Dragonriders of Pern, go back into the world of Sherlock Holmes on Victorian London, join the hobbits in the Shire, find Harry Ron and Hermione on Godric's Hollow, and go down, down, down with Alice from May 23 to June 4th!

Come appreciate the builds. Each builder has experienced cancer in one way or another, whether they had or have it themselves or they cared for someone who did. Each build tells their story, their journey of cancer. We hope to see you there! Headed by Rowena Dubrovna, Cuddly Waffle, Sidonie Carlberg, Henrietta Demina, Nevar Lobo, Sue Peregrine and Sandie Loxingly Turbo with sim designers Grace Loudon, Cuddly Waffle and Mac Aries....the Castle Home and Garden Contest promises to be an event of a lifetime, once upon a time, in a land far far away.
Posted by Bixyl Shuftan at 6:00 AM