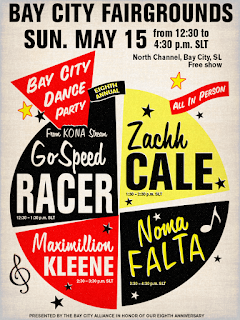 A full lineup of festivities for this milestone year.

BAY CITY, SL (8 May, 2016) - As part of Bay City's Eighth Anniversary, enjoy a music extravaganza in the Bay City Fairgrounds on the 15th of May!

"What is KONA Stream? It is my personal station I run from my home. I play mainstream pop and rock music from the 60s, 70s, and 80s along with soundtracks, novelty songs, mashups and light sprinkling of country. My current library has 13,000+ tracks in it"

"Zachh Cale is a live performer in SL - singer and keyboardist.  He re-interprets rock and pop songs in unique way on piano/keyboards.  He's influenced by Elton John, Billy Joel, Bruce Springsteen, Joni Mitchell, jazz standards, and many of the greats.  If you enjoy a wide range of music, from jazz standards, to American songbook, to pop and rock, and the sound of piano and keyboards, you'll enjoy his shows."

"Noma Falta is the kind of SL musician that fills up a venue because of her genuine talent. She hits you with bluesy, soulful, music with her own tracks or just her guitar and you’re blown away. Many may not know that she played with a symphony. Or that she fronted for numerous rock bands."

Event held at the Bay City Fairgrounds in North Channel, easily accessible by boat, car, walking , or teleport. Come on down!

The event is also the finish line for the annual anniversary parade!


Participants in the annual parade are asked to gather at noon SLT/PDT on Sunday, the 15th of May, to lineup at the band shell in Bay City - Harwich. The parade will wend its way down Route 66 beginning at 12:30 p.m. SLT/PDT, and will conclude at the Bay City Fairgrounds in the North Channel region.

Viewing locations are provided all along the parade route.
Posted by Bixyl Shuftan at 6:00 AM