Lost Gardens of Apollo Memorial: A Sim Is Rebuilt


It was almost five years ago in June 2011 when the "Lost Gardens of Apollo" vanished from Second Life. Built in 2005 by Dane Zander, this was a beautifully designed sim with stone architecture and mosaics built well into an island landscape, with high towers stretching high into the sky, and cuddle spots set among a number of pillows and pools. A popular spot for couples who could snuggle or find a spot on a platform or floor to dance in the sunset, it's end was a sad event for both longtime fans and for people whom had just found out about it as word got around. The Newser was around to get a few pictures before it closed. 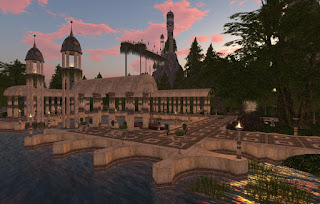 Usually when a location disappears from Second Life, there's nothing left but screenshots, videos, and memories to look back on. In the case of Svarga and the SS Galaxy, Linden Lab intervened to preserve the places, but this would not be the case with the Lost Gardens. Instead someone would step in to bring back the Gardens on her own. The result is the "Lost Gardens of Apollo Memorial" in the
Sorbon Beach sim, built and owned by Delphi Bernard. The sim is a rebuilding, and not a true duplication. But the structures are done in the same style, capturing the beauty and soul of the original Lost Gardens. 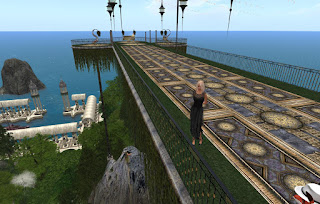 "I want to bring back some memories," Delphi told me when I met her at the Gardens. She told me in trying to rebuild the place, she had a double challenge. She basically had just screenshots and videos to work with, "to rebuild the terrain just from memories and pictures, that was not easy. And (to) find the original textures, it takes some days." She told me the Newser article was one such source. Another problem was that this wasn't a full sim but a homestead, "A big challenge was to rebuild that all just with 3750 prims. ... This is just a homestead sim, so I can not rebuild all. I hope you can feel the spirit (of) Apollo a little." She told me it took four to five weeks in total to rebuild. She went on to say Dane Zander, the creator of the original Apollo had seen the place and was happy with it. 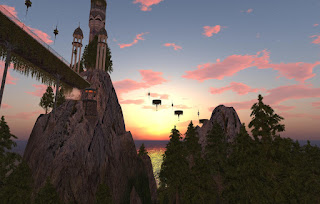 Delphi says she should be able to hold onto the sim for the foreseeable future, so both longtime fans of Apollo and those whom had heard about the original but had never seen it can enjoy the location, "I think a little bit retro is good for all."

And so the Lost Gardens of Apollo are back. Perhaps some of the statues and a few other items are not there, but what defined the old Apollo sim is there. For longtime residents whom have seen sim after sim fade away, the return of such a well built area is welcome news.