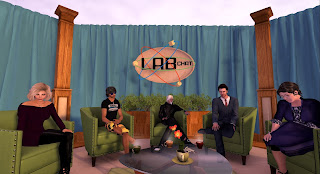 I was happy to be able to attend the latest Chat Lab at LEA 4 on Friday. It is good to see these discussions continue. Saffia Widdershins and Frau Jo Yardley hosted and presented questions that had been submitted prior to the event and then switched to the audience questions. You will be able hear the entire conversation or read the transcripts soon. This is just a teaser.The Lindens participating were Troy Linden, Oz Linden and Ebbe Linden. They tried to keep the answers understandable and not too technical although some was over my head. There were over 100 avatars at the meeting, including some other Lindens attending also: Xiola, Keira, Pete.
Saffia opened with the announcement that there the LEA(Linden Endowment for the Arts) land grant applications are open to creators who wish to apply. 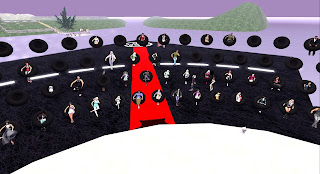 Then they went directly to questions. The first few were about Bento, and involved the new processes of movements that will be up coming. Some creators are using certain moves in very creative ways as you will see. The lab is trying to incorporate suggestions of the residents into its development and are actually thrilled to see the residents being so creative. It sounds all very interesting and I hope to try the beta just to take a peek.
There was discussion of the current viewer improvements that they are working on. Another question was about uploading of mesh and how to make it easier to upload more than the present 8 faces at a time.
They moved on to Sansar and one thing I found very interesting is the goal of being able to accommodate more than 100 avatars at bigger events  and possibly concurrent across some worlds and are hoping that by the end of this year there may be some movement in that area. Right now the most work is going into testing for the fundamental and basic user experience to be sure it is the best it can be. Thousands of creators have asked to be in beta for Sansar and at this point hopefully they will be notified and admitted in July or August . They are looking for committed users to use the beta , and as they need to be sure the project is ready enough not to inflict “too much pain on the first users.”
It is great to hear the Linden Lab group so accepting to suggestions from the questioners who have good ideas to be incorporated. That is how we solve things here says Frau Jo. 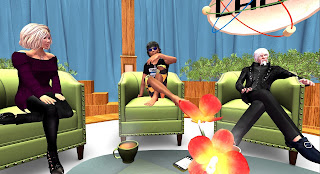 Another interesting question was regarding some of the avatars who are begging in groups for 100 L for rent for example and the best way to report them. Reporting by AR  is requested, please, with all the possible information for the Lab to be able to make a decision based on what they are told. It is better not to flood with multiple AR’s because it slows down the process. It is the nature of the complaint that is the issue and not the number.
The Lab is not ready to discuss money issues in Sansar but it looks like there will be some form of coin like lindens but that is still ahead for decision making .One sad thing I heard is that Mac users will have to wait until  the end of the year or more before all the doors will work. Some more linden experiences on the way but not yet ready for prime time.  There is much information, some not understood by me, but they try hard to not make it too technical in nature. It is good  to see the Lindens back in Second Life working and playing with the residents. It is greatly appreciated that they are listening to the residents. The meeting with a couple of breaks lasted for almost 1 hour and a half and it was most interesting. There is  uch more discussion that you will want to hear for yourself. Watch for the announcement of the transcript availability.  https://labchatsl.wordpress.com/  is the place to find it and the past ones are there for you to check out while you wait.

Gemma Cleanslate
Posted by Bixyl Shuftan at 6:02 AM