I get a few messages in my email and Facebook about places that deserve a look, or concerns that the reader feels they need attention. With the five year anniversary of the death of Bin-Laden about this time, one certain email got my attention. The writer claimed there were Islamic extremists causing trouble in Second Life, his message containing part of a chatlog dated from mid-November.

Secondlife gamings sites are were the terrorist find kids and are recruiting; there is a need for actions.

We need to close down Linden Lab, Head Quarters, 945 Battery Street, San Francisco, CA94111, as they are supporting terrorist by coving up that they do use the sites. and the terrorist attacks in the EU countrys could have been stop if they had took action.

As it turns out, there's no record of the name the reader gave in the Second Life database. But to me, this looks less like a terrorist, and more like a troll trying to stir people up. There wasn't a record of the person who mailed me earlier; when I asked him about it, he told me the Lab wouldn't listen and banned him. 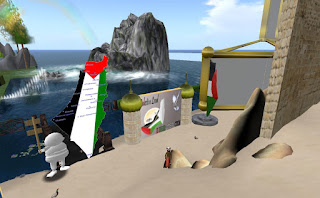 As it turns out, Federal agents have investigated Second Life. as well as World of Warcraft and other MMOs, after concluding they were "potentially 'target-rich environments' in which suspected terrorists 'hide in plain sight.'" (Techdirt article) But "experts and developers of games like these have found no evidence that terrorists are using their services to communicate or recruit new members." “For terror groups looking to keep their communications secret, there are far more effective and easier ways to do so than putting on a troll avatar.”

It is true that supporters of Islamic Extremism have been on Second Life before. A few years ago, there was a place in the Jordan River sim supporting Hamas with many displays of pro-Hamas propaganda against "the Zionists." But eventually the sim vanished. While there are are places in Second Life built to attract Arab users, such locations are the scene of people engaging in idle chatter and games and not terrorism.

So no, there is no ISIS in Second Life, unless you mean builds of the Ancient Egyptian goddess of life, or perhaps an "Opposing Force" group for a combat sim (somebody has to be the bad guy in one).