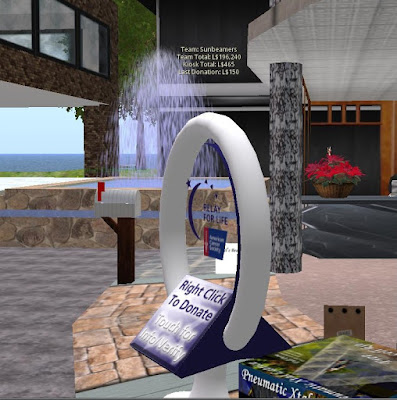 The good news for the Relay for Life's team Sunbeamers continues. Just eight days after the team representing the Sunweaver community reached Bronze rank among the various Relay teams, it's climbed to the next one. The Sunbeamers are new Silver. It was a donation from chieftess Rita Mariner that pushed the total into the next level. As of the writing of this update, the total amount raised this year is 196,240 Linden dollars.

Our team is now SILVER.  Bunny went nutz and dumped 25K lindens into the BID ME kiosks. Now it is up to the rest of you to get us to GOLD!

Some of the money went to the three "Bid Me" events going on with the Sunbeamers. Rose Evans' "Bid Me Human" now stands at 700 Lindens for "stay furry," and 10,500 Lindens for "go human." For Becky Shamen's "Bid Me Bald," the current totals are 150 Lindens to keep her hair, and 17,550 for the "hare cut."  But for Rita's own "Bid Me Pink" event, the balance has shifted from "pink bunny" at 8,550 Lindens to "stay white" at 22,100 Lindens. With almost 60,000 Lindens in total raised by these three events, these "Bid Me"s are proving very beneficial for team morale (though maybe slightly embarrassing for the three volunteers.