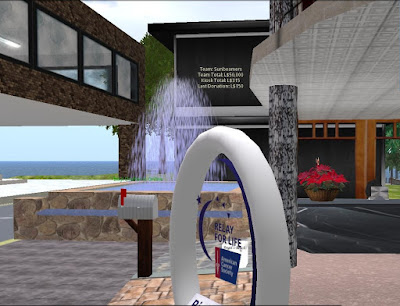 It's been a bumpy season for Team Sunbeamers. The successor team to the top-ranking Passionate Redheads, the team has never enjoyed the numbers of it's predecessor. And this season, a number of it's more active participants have had to deal with problems of one kind or another. Rita Mariner finally addressed this matter in an announcement in the Relay group the other night.

Hi All:  You may have wondered why the Sunbeamers have been quiet regarding the RFL this year, so far.  Well, we are a small team and three of our core members have suffered tragedy this spring.  Nydia Tungsten lost both her mother and her computer, Cynthia Farshore lost her dad and Becky Shamen lost her mother.  Along with several members being sick, it has been a rough spring for us.  but we are still here and still relaying!

Rita herself didn't mention her recent car repairs, which run into the thousands.

Despite these problems, Team Sunbeamers have made slow, steady progress, in part due to some money donated from members of other teams. Last night, the team finally hit the 50,000 Linden mark. In the past, this would have been enough to reach Silver rank. But this year, it takes 75,000 just to reach Bronze. For now, the Sunbeamers are in the newly created "Rising Star" rank, along side the noted teams "Giant Snail Races" and "Relay Wizards for Spunky."

To view the totals of all the teams: Click here.
Posted by Bixyl Shuftan at 6:02 AM