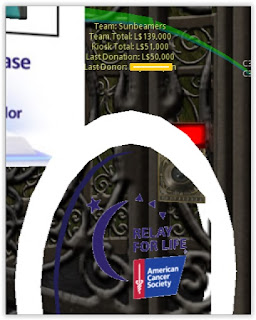 What a difference a week makes. Several days ago, Team Sunbeamers had raised a total of about 54,000 Lindens. Not a bad total, which was greater than some noted teams such as the Giant Snail Racers and the Relay Wizards for Spunky, but for the team that takes pride in being the heir to the highly successful Passionate Redheads, and being the team of an active community with some noted members such as Lomgren Smalls and Alleara Snoodle, it seemed like the team had seen better days. This year, a number of members were suffering from illness, dealing with family tragedy, or were hit with financial troubles. As one member put it, "we don't have the deep pockets of some of the bigger teams, and lately some of those pockets have been sewn shut."

But fortunes can change, and in the past few dayss they have. On Wednesday night, the team total went up to Bronze level thanks to a donation by Becky Shamen. It was a total that would continue to rise as donations kept coming in over the weekend with our presence at the Relaystock. Then came a surprise. One individual had donated 50,000 Lindens to one of the team's kiosks. Donations would continue to come in, Rita Mariner herself chipping in 10,000, and on Sunday night, the total was 150,000, or $600 US dollars.

Last year, 100,000 was enough to get Silver rank. But this year the requirements have gone way up, the amount needed to reach that being 180 or 190,000 Lindens. But with three "Bid Me" events currently going on (more about them later), and an upcoming air show and road rally, confidence is high that silver rank will soon be reached.