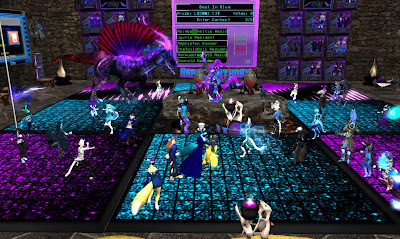 Saturday May 7 was the Ninth Anniversary party of Furry Fashion. Since April 30, the sim-wide store had been doing a hunt in which thirty free items were hidden, available for anyone who found them. And on Saturday was the main event, taking place in the Furry Fashion Lounge, an event going on for over ten hours from 12 Noon SL time to sometime past 10PM. 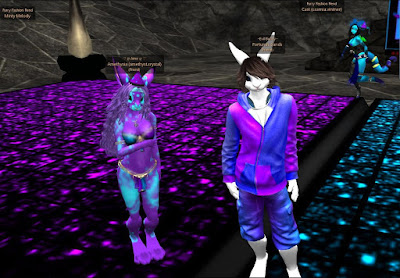 Amethyst Crystal, the owner of the store, was there, along with her longtime friend Fortunas Sands, who was one of the DJs at the event. Many of those there sported blue and purple avatars or outfits, and indeed the theme for 2-4PM was Best in Blue, and 4-6 PM was Best in Purple. 12 Noon's theme was for items bought in the store. 6PM was Come As You Are, a theme repeated for the "Afterparty" at 8PM. 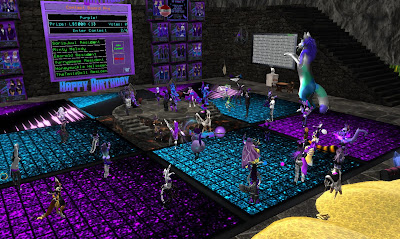 On occasion, a random prize giver would give someone an outfit or accessory at random. Yours truly ended up handed a couple of no-transfer skirts though. Fortunately there was a freebie avatar available for pickup next to the cake. And there was no shortage of avatars around, mostly furred, though a few dragon and human ones dropped by. And the prizes on the boards, originally set to 2,000 Lindens, swelled to larger size, the 6PM event's prize rising to a whopping 15,000 Lindens! DJ Scratchmusikatt spun the tunes for the prime time event.

The 15K prize was split between Emorald, who came in first place with 7500, Takuan, and Jyvris. 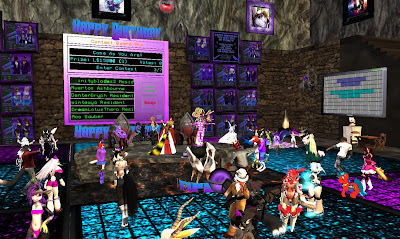 We here at Furry Fashion would like to extend a HUGE thank you to all of our staff and patrons for making the sim's 9th birthday a smashing success! Without all of you, we would be nothing, and you all turned out for the most epic party we've had yet and made it one to remember. Thank you all so much!