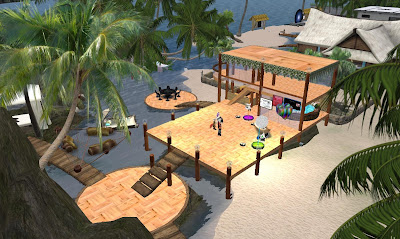 Last week, the Sunweaver/Angel's beach club, the "Happy Vixen" was closed for a few days while the club was renovated to give it a new look. Part of the reason was the make the club slightly larger due to a little more space available. 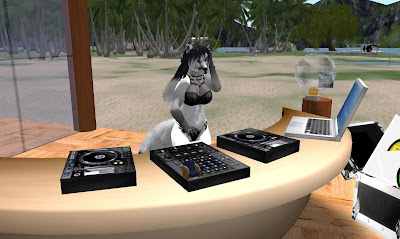 The club is jointly owned by Nydia Tungsten and Helios Auxifur, with Helios owning the land. Jasmine Dawn and Ranchan Weidman were the ones who rebuilt the club in in it's new form. The club and hangout consists of a main building built over the shoreline on peirs, which itself comprises a dance floor and DJ booth and a two story roofed area with a bar and hot tub. A few smaller wood surfaces were built over the water next to the main building, with walkways bridging them. On two are a couple games, "Greedy" and "Cards Against Humanity." Some rocks with waterfalls are also in the water, a palm tree growing out of one having a wicker seating area hanging from it, able to hold several people. There's also a raft where a couple can lay, in addition to a lounge with overhead sheeting. 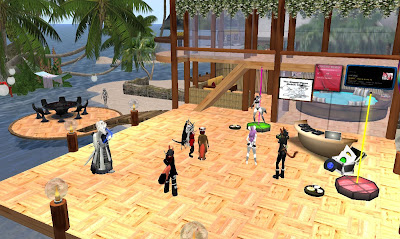 On Memorial Day yesterday, there was an impromptu gathering as Nydia tried out her radio stream. But the official Grand Reopening is tonight at 6PM SL time, when DJ Tantari Kim plays her selection of music for the crowd.

The Happy Vixen was inspired by the "Angels Beach" club, also owned by Nydia, which was around from 2009 to 2010. The venue got it's start as a beach shop in 2011, which soon had a dance floor and DJ booth built next to it by Treminari Huet. In November that year, the club was expanded following the closure of the Raised Tail Resort club (which has no connection to the adult club named Raised Tail). Since then, the club has been renovated several times. most recently in August 2015.