Announcement: Bid a Nightmare to End The Nightmare 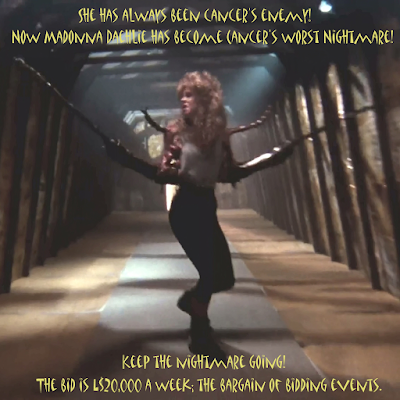 Madonna Daehlie has never been one to shy away from a challenge for the Relay for Life. Known for her rubber suits, DJ Madonna  certainly stands out as a unique personality among the Relayers. But if anyone thought she was scary before, they should see her now as she resembles a human/spider hybrid as part of a fundraiser: "Bid a Nightmare to End The Nightmare That is Cancer."

Madonna has been injected with something awful and it gave her spider arms like from "Nightmare on Elm street." What was the mad woman in the sweater said? "Live a nightmare to end a nightmare like cancer."  So 20K for each week you wanna see Madonna bugged out!

Article updated 7PM SL time due to kiosk moved
Posted by Bixyl Shuftan at 6:00 AM