Last Weekend at the Roma Festival 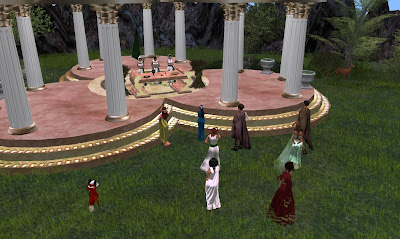 While still stuck in the Tokushi tiny fox avatar from the Fox Avatar Challenge, last Sunday I checked out the Roma festival, which was centered around the Roman goddess Ceres, their goddess of agriculture (of whom the dwarf planet Ceres is named after, and whom the word "cereal" can be traced). A few Romans, familiar with my usual Lusk fox avatar, asked what happened, and I explained it was part of a Relay event, so they accepted it in stride, one roleplaying her action, wondering if I'd been put under a curse of some kind. I suppose to them, with my size I looked more like a fox than ever, just standing on the hindpaws, wearing a hat, and talking. 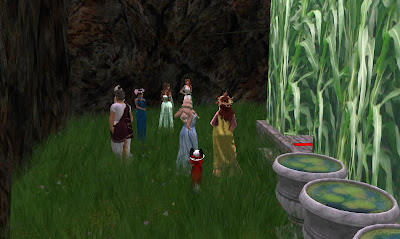 After a roleplay ritual to honor the goddess Ceres and ask her blessing for the farmers and ctops, the group headed to a corn maze. Here, we were told that an image of Ceres' daughter Persephone was somewhere in there. We were to head there, take one of the pomegranates, and head to the exit. The first three to finish would get a prize. A voice which someone thought was Ceres encouraged us as we went along. Someone joked that maybe someone would get lost there for good, but the referee grinned, saying they hadn't lost anyone yet.

Those familiar with Greco-Roman myths may recall Persephone had been abducted by the god of the Underworld, and while there had eaten several seeds of one of the fruits from a tree which had bloomed after her arrival. Normally anyone whom ate anything in the Underworld would be trapped forever, but a deal was worked out so she only spent part of the year there, during which the land would cool and become less suitable for farming as Ceres was depressed over her daughter being away. 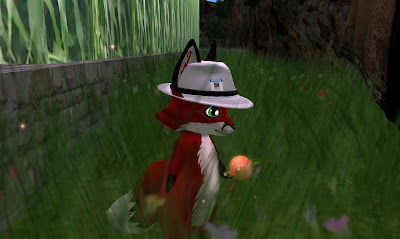 And as it turned out, yours truly found one of the pomegranates and was the second one out. I got a 500 Linden prize for my efforts.

The Roma historical community has festivals at the last weekend of every month, and unlike some historic areas, avatars of all kinds from furs to tinies to ponies are welcome.