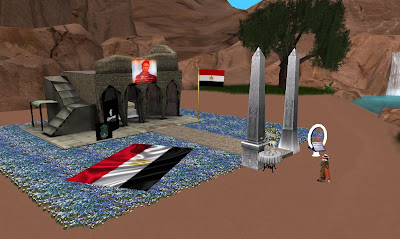 Last Wednesday night, May 18, EgyptAir Flight 804 went missing over the eastern Mediterranean Sea on it's way from Paris to Cairo. With aircraft debris and human remains found in the vicinity of where it vanished, it is clear the airplane crashed into the sea. There were no signs of any survivors. Among those on board was Second Life resident Nikoli Redmayne, one of the leaders of Relay for Life team Spirit of Sherwood Forest. He was reportedly in Second Life for a total of nine years with this and a previous account. 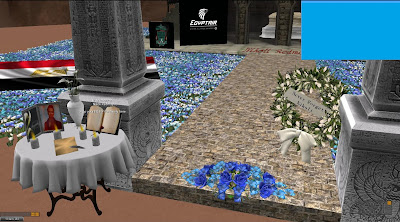 High above the Stheno sim, a memorial was set up in honor of the late Relayer.  It consisted of a tomb in the middle of a field of flowers in s desert, with Egyptian flags, and signs for EgyptAir and Relay team Spirit of Sherwood. At the entrance were two obelesks with ancient Egyptian hieroglyphs carved into them, with a memorial wreath next to one, and the other a table with several candles, a book where people could place signatures, and Nikoli's picture.