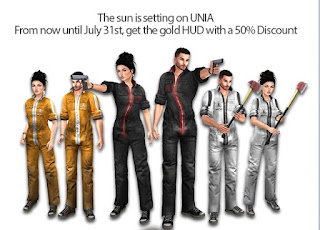 It was about a year ago in which the Madpea gaming team and location released "Unia," an inworld horror game. The product of more than two years of development, Madpea was very proud of the game, and the public group chatter has been full of people playing and asking for hints for many months. But all good things, and scary things, come to an end, and earlier this week Madpea announced the game would be closing on July 31.

UNIA was a dream come true for us at MadPea but every dream has an ending and UNIA’s end is nigh! July 31st UNIA will close and the zombie chickens will be returned to their pens, the sandworms will bury themselves forever and the Dreamers will drift off to restful sleep forever more. UNIA was the biggest game to hit Second Life and has been keeping players captivated for over a year. Until the closure in July we have slashed the price of the gold hud to 500L$ and removed the Silver and Bronze options. Play UNIA from now until then with your friends before this piece of Second Life history is no more.

Those interested in playing, it's not for free but the full package is now cheaper. The Bronze and Silver HUDs, which were 400 and 750 Lindens respectively, have been discontinued while the Gold HUD, which has three colors of uniform, a "triple shield," and a lockpick for an axe and gun, is now 500L.

Madpea has a long history of making games within Second Life, going back several years, some of which the Newser has reported on. Their most recent game is "The Interview."

Instructions on how to play Unia