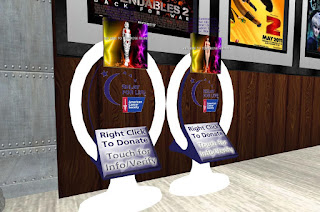 Following the "Fox Avatar Challenge" and "Bid Dusk Something," Team Sunbeamers is currently having not one, but three "Bid Me" events to raise funds for the Relay for Life. The three are "Bid Me Human" for DJ Rose, "Bid Me Bald" for the Newser's own Becky Shamen, and the Sunbeamer leader is putting herself on the line with "Bid Me Pink." All three events have their kiosks at Club Cutlass, which will be totaled after the club's Wednesday night party on June 1st.

Rose Evans, a resident of Purrfection, is best known for her tunes as DJ Rose at the Happy Vixen. Talking to her, she told me no one talked her into this, but volunteered on her own, wanting to do something to help. Normally a white tigress, she offered to put her fur on the line, and be stuck as a brown-haired human for a while. As of the writing of this article, residents have contributed 700 Lindens to keep her fur intact, but 5050 to make her tailless for a while. 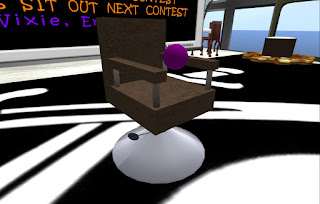 Becky "Sha" Shamen, the Newser reporter making her home in the Sunweaver Estates, has opted for the traditional "Bid Me Bald" challenge. While many furred avatars have their prim hair fixed to their scalp so it can't be removed, this isn't the case with her mesh bunny. So she's put her hair on the line.

Sunnies/Beamers!  Becky Shamen, aka Sha has offered herself up to get shaved, to raise donations for the Sunbeamers and the RFL   You can find the kiosks in the Club Cutlass lounge area, so bid high and often.  Sha has been very supportive of the Team and the RFL, let's support her.

As word's gotten around, other Relayers have been getting into the act. Trader Whiplash, the man considered to have started the original "Bid Me Bald" contributed a barber chair and a pair of scissors to the event. So on the night of June 1st, poor Becky could very well be facing a "hare cut." Who will be behind the pair of scissors is yet to be determined.

As of the writing of this article, 100 Lindens have been donated to keep Becky as is, with 5,550 donated for the "harecut," making for a total of 5650 and so far the most successful of the three events. 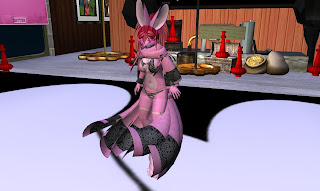 And last but hardly least is Rita Mariner, the chieftess of the Sunweaver community and the leader of it's Relay team the Sunbeamers, whom volunteered for a "Bid Me Pink."

Sunnies:  I have put myself up for a BID ME,  You can choose to keep me my cute, sweet, white bunny, or turn me into an EBIL, PINK BUNNY!  I dislike pink on me!  So here is your chance at REVENGE!  Kiosks are in the Club Cutlass Lounge, along with the other 2 Bid Mes.

Remember I change and stay for a week for each 5K L raised. So far you only got me for a week.

Over the years, Rita has been in a number of "Bid Me" events for both the Passionate Redheads and Sunbeamer Teams. In 2011, she did a "Bid Me Human" that netted 75,000 Lindens. In 2014 was the "Man Up Rita" event that brought over 72,000 Lindens that resulted in her looking like Pepe Le Pew for a while (an avatar some commented she was overqualified for).

Will Rita be facing a "Bubblegum Crisis" on the night of June 1? So far, 1100 Lindens have been donated to keep her a white bunny, with 2000 to make her "pretty in pink." While so far the smallest total, there's little doubt the amount will increase as the Sunnies, and their friends, get to have a little fun with the "killer rabbit." Whether or not at the close of the June 1 party at Cutlass the DJ plays "White Rabbit" or a song from the band "Pink" is anyone's guess.

As for as the writer knows, all three events are 5,000 Lindens for the first week, and an additional week for the next 5,000 raised.