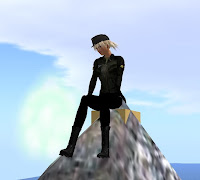 Among the people in the WW2 RP is Vickster Kuhn, the commander of the German JG 2 flight group, also known as the "Richthofens." As work was being done on an article for the combat sims, she agreed to an interview, to tell her side of what goes on with the combat roleplay, and some of how it came to be.

For the interview, go to People.
Posted by Bixyl Shuftan at 6:00 AM