A decade ago, madmen in Afghanistan launched a plot to murder innocent civilians in New York City and bureaucrats further South. Nine years after that war crime, people of SecondLife (SL) proved that humankind shall never forget to hunt down those lunatics and eradicate their heinous insanity from the planet. As news media, we must be very careful not to aide the cause of murderers. Words matter: they were MURDER bombers. Publicity for their despicable crimes is their primary tool. 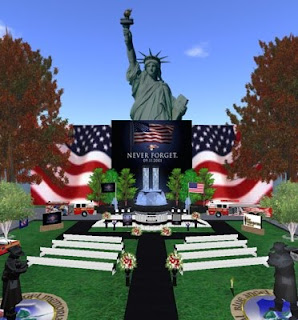 About all this, I spoke with people at the 9/11 ceremonies at Blue Angel Memorial in SL's Unsung Village sim. Melodie Jigsaw was in Texas on 9/11 and thought: "sheer overwhelming loss and tragedy - the complete sacrifice of the first responders - the devastation that occurred so quickly and so unexpectedly… takes my breath away today." And when I asked her about burning Korans and building YMCA-like Islamic centers in NYC... a surprising and delightful response: "its just a damned shame that 1) people can't tolerate differences in each other and 2) people do things that they KNOW will push buttons. Yes, you CAN burn a Koran or build a mosque anywhere you like - but does that mean you have to? When you are CERTAIN to do nothing but cause unnecessary drama?" Dang! Nobody messes with Texas ladies!

Blue Angel organizers Hope McAlpine, Drakken Calhoun and many friends dedicated the 9/11 ceremonies to Leary Firefighters Foundation. Yes, that's Dennis Leary from the hit TV show about firefighters: "Rescue Me". Find out more and donate at: http://www.learyfirefighters.org/ Or you can experience the amazing 9/11 memorial garden and donate at: http://slurl.com/secondlife/Unsung%20Village/60/144/23 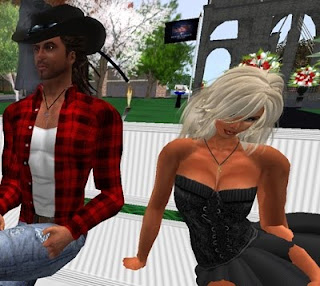 Next, I spoke with Darkstone Aeon, who was an eye witness on 9/11. He recalled: "was on the phone with my brother who lives 5 blocks from the towers. I was joking and he said 'noooo! a plane hit the tower.' He said it was so loud he hid under his desk. I stayed on the phone with him… then watched as the 2nd plane hit and watched as the towers came down… I had customers who worked in those towers." His brother survived. Later, Darkstone shared thoughts about extremists who pervert religions: "they breed fascism and hatred and have for centuries destroyed… while people commit genocide in the name of god. Thats why I am here… because we should NEVER FORGET."

Anya Mellison, SL owner of Blazing Iris Consulting / Photography / Jewelery Fashions and Blazing Blazing Lounge ,told me about losing her childhood friend on 9/11. She created a special work of art, dedicated to her friend and shared it with SL Newser. 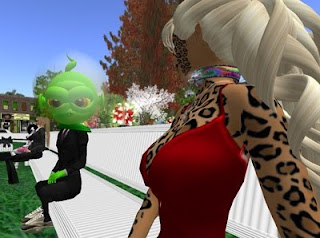 Greenies have a special place in SL society. Why they go green, who knows? I met a very wise Greenie on 9/11, Awesome Portilo, who shared: "As for the [Islamic] YMCA [near WTC], I feel like every person is an individual. I hate grouping people together like a lot of others do. America is a melting pot, it always has been. This [World Trade Center] was supposed to be the place everyone could go when they felt like hope was lost everywhere else. Just because a certain terrorist group attacked us at one point in time, we shouldn't be so quick to punish others by refusing such buildings."

And I talked to many others… with heartfelt quotes, enough for many news stories. These are ordinary Americans with impressive insights, wisdom, and creativity. As a reporter, 9/11 is actually my favorite day of the year. This is the day when hearts open up. American strangers become American friends. The inner beauty of peoples' souls is freely shared with abundance, love, and kindness.

Any1 Gynoid
Posted by Bixyl Shuftan at 5:59 AM