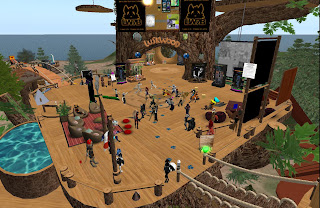 A few months after Second Life threw it’s seventh birthday celebrations, one of the oldest communities it has is throwing it’s own seventh birthday: Luskwood. Officially, the festivities began at 5 PM SL time at the Great Tree when Zorin Frobozz began DJing to the gathering crowd, numbering in the 30’s. The audience varied, from those whom regularly hung out at Luskwood, to visitors, and even some newcomers dropped in.

At 7 PM was the live music act. Most of the crowd went down to the stage, where Jaycatt Nico and Frogg Marlowe (sometimes called F & J or Effinjay) performed to the audience, most seated, but a few dancing up front. Among those dancing was founder Liam Roark, whom was sporting one of the new “tribal trance” hyena avatars, which had a bit of a neon glow to it. The audience numbered close to forty, and despite Luskwood being seen as a "furry" place, over a third of the audience were normal human avs. 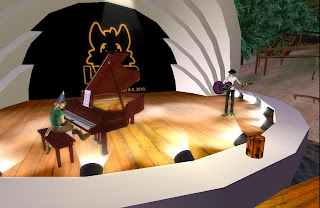 The wiki entry states “Luskwood is also currently the oldest known resident created, themed mainland build in Second Life.” Dropping by the place, it’s a safe bet someone will be around. The place is a little quiet at times. At others, the discussion can range from geek trivia to history, to techie talk on how to fix computer problems.

Michi Lumin: “Thank you for being here, and for helping us be here.” :)

“Michi, thanks to you and all the others that have put so much time into making this such a wonderful place.”