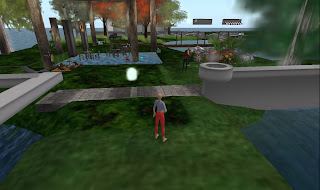 Well, yours truly gave another virtual world a try.

I like to explore around, and while there is no shortage of places to look around in SL, this is entirely new territory. With the troubles in Second Life, some residents are looking for alternatives just in case land becomes to expensive to own, or worse.

One alternative some friends told me about is Inworldz. Described in its FAQ as "a Virtual World initially based off the OpenSim software," they gave it a try, and liked it. While sticking around in Second Life, they return occasionally to keep an eye on goings on.

So yours truly decided to give it a try. I downloaded the client software and ... it didn't work. But the Imprudence Viewer could also access Inworldz. So I tried that and ... made it. But I was cloudy, things took longer to rez than in Second Life, and in less than a minute I crashed. I tried again, and crashed again seconds later. Third time was not the charm, crashing again in about a minute.

A friend told me that the newest version of Imprudence was more stable, so I downloaded that and gave it a try. This time, I lasted long enough for me to check my inventory and find a cloud-dispeller. I managed to walk a short distance, then lag hit, stopping me in my tracks. I was able to pan around, but after a few minutes I crashed.

It looks like Inworldz isn't an option for me, at least for now. Other virtual worlds? Blue Mars has gotten some talk, but as it's not Mac compatible, it's not an option for me. Getting a PC? As a blue-collar worker, buying one just for access to a second metaverse is not exactly a smart use of money.

So for now, it looks like my only alternatives to Linden Labs are World of Warcraft and Facebook.