In the SL Universe forums, Sextan Shepherd, the owner of the noted Nemo area would soon be closing. It is due to shut down October 29th.

“It was a great fun to create this place,” he posted, “but now it's time for me to "move" on another SIM project. ... I have learnt a lot while building this place and I consider Nemo as a training course for something more improved.” 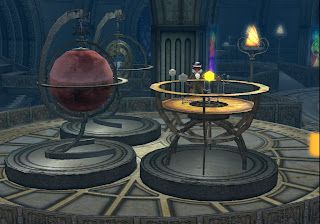 The reaction on the thread was unaminous. The people there were sad the sim was going, and wished him well with whatever his next project was.

Nemo, also known as the Nemo Trilogy, was a much praised place in Second Life that was considered among the best built in recent months, built on March 23rd. It got the attenton of Linden Labs, and was featured on their Destination Guide as a place to go to. The place you start at is the entrance to a Steampunk style submarine city. From there, you can take a train that leads to a reproduction of Captain Nemo’s submarine the “Natulis.” There is also an ariel city, with an ariel museum and an observatory.

Nemo is at the FRANCE3D Futuna sim (91, 148, 21) In April, Second Life Newspaper did an article on the submarine base.

“Prims to prims, pixels to pixels.”