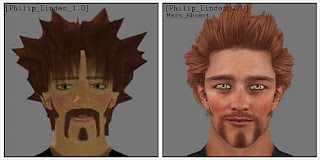 In a Community post on the official blog on Saturday October 16th, it was announced that a winner had been selected in the “Philip Linden 2.0” contest. Philip had gone through the numerous submissions of proposed avatars, and finally chose the design made by Mars Absent of “The Abyss.” He was reportedly “thrilled” with his new appearance, of which the old spikey hair now looked much more natural. But the clothes didn’t change much. He was still wearing his trademark “Rocky Horror” lips T-shirt and the codpeice over his groin. 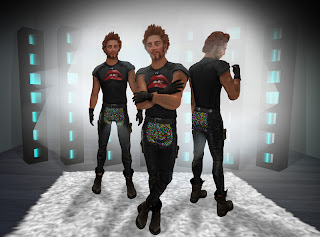 The Community post itself was closed to comments. The only resident-created forum thread seemed to be a debate more about whether or not he had the right to wear that shirt due to 20th Century Fox’s copyright than the new avatar. In the Second Life Universe forum thread on the subject, reaction was mixed. Some liked the new look. Others thought it left something to desire, or felt the contest was a waste of time.

And so, the Grid’s most famous resident gets a long-awaited update.

(Images from Linden Blog)
Posted by Bixyl Shuftan at 6:01 AM