A Visit to Devil's Labyrinth, Madpea

I came after hearing about a "medical game" (which turns out to be the Virtual Medical Doctor here) where you enter a giant body and try to figure out what is wrong and then fix it.

What I got was a small store with a lot of good ideas, and not just a medical game, but several games: Kaaos Effect, Devil's Labyrinth, the Dead Man's Hand Hunt (find all 52 cards!), the Virtual Medical Doctor, and Firefly.

Instead of visiting the medical doctor, I picked the Devil's Labyrinth instead, since dungeon crawls are something I've always loved. After paying 25 $L for a hud, it was on to the maze for some exploration and monster-smashing. Well, exploration for a while at least, as after I got the first "item" I ended up dead due to a collapsing floor trap. 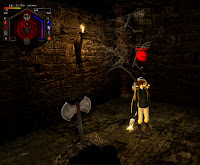 I'm definitely putting this in my "places to go when tired of playing Rift" folder. There's a lot of clickables, a lot of interactive things (try standing near one of their altars during the game) and even creature combat, which I never got around to. This is -exactly- the kind of thing I would have attempted to design early on in my SL career, before getting turned off by all the people crying out that LSL was a clunky garbage language. Madpea Productions also seems to offer a lot of services through a website, so if you want something like the Devil's Labyrinth, they can make it for you.

Xymbers Slade
Posted by Bixyl Shuftan at 6:00 AM