Luskwood's Rumble in the Jungle 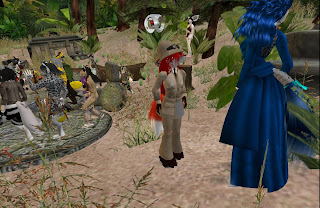 Last Saturday, I decided to stop by Luskwood to see what was going on. The place certainly had changed since I last stopped by, the Big Tree's platform now overgrown with grass. This might have been a one day happening as I noticed a sign: "Jungle Party - March 26." It was today. These kinds of events don't happen too often at Luskwood, so I checked the map for the nearest cluster of avatars, and headed over. 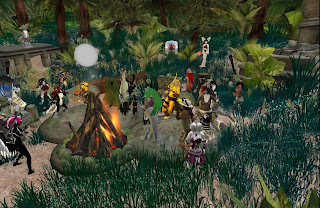 In the Perry sim next to Lusk, an ancient ruin had been set up, with a rain forest and waterfall around it. There were about a few dozen avatars gathered there, so it took a while for them to rez, and there were probably a couple whom never appeared more than a cloud. With Lusk's strictly enforced PG rating, residents at the tree stay in their clothes. It was somewhat relaxed at the party, with the majority of the avatars wearing loincloths, resulting in a few bare thighs. A few appeared looking like Victorian explorers. 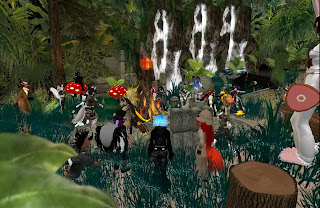 I noticed one security guy looking like some kind of space probe, presumably keeping an eye out for griefers. Mousegirl AnneDroid Lilly stood over the bunch, wearing skins and a ham in her hand (hamming it up?). Blogger Treminari Huet was also there. And in the middle of it all was popular Luskwood Founder Michi Lumin, the skunkgirl still in her trademark tank top and top hat.

Luskwood is one of the oldest social areas in Second Life, as well as the location of the Luskwood furred avatar company. Some in Second Life get their start here, either by stumbling across it, some poping over from the entry area for newcomers, or by hearing about the location. This includes yours truly.

I don’t drop by as often as I used to, but that night was a fun time to be back.