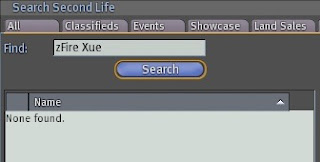 In the latest development of the Redzone controversy, the maker of the product zFire Xue (and apparently his alts) have been banned from Second Life by Linden Lab.

Checking the Redzone forum, it appears to be down.

In the two weeks since Linden Lab finally moved against the alt-detecting product, there has been much discussion about zFire Xue and what he might be up to. There have been reports hackers have broken into his database of accounts and IP addresses. The No2Redzone blog stated not only was ZFire manually adding the accounts of Greenzone users to his blacklist, they went as far to say in real life zFire was a convicted criminal just before they announced his banishment.

This may not be the end of the story, considering zFire's threats to sell his Redzone service outside Second Life and Marketplace. But to those whom have continued to campaign against him, this is a development they have been waiting for.

For more, read: No2Redzone, Dwell on It, The Alphavile Hearld, Treminari's SL Blog. The Hydra also had a commentary, saying Redzone could just be the beginning of a serious privacy scandal for Linden Lab.