It was just an ordinary day at the Podex Exchange when something highly unusual showed up, a bank robber.

A masked man in dark clothes walked in, acting calmly, headed to one of the tellers, and then drew a gun, “This is a stick-up! Hand over all your Lindens, no one gets hurt.”

The teller just stood there, stunned at the surprise threat. Then he blinked, recognizing what was pointed at him, then chuckled, “A popgun? Funny joke buddy.”

“This ain’t no joke!” The man then fired at the glass on the counter. But instead of shattering it, the projectle harmlessly bounced off the surface.

Everyone then stared at the would-be armed robber, one saying, “Okay wiseguy, you just earned yourself a police call.”

The criminal then turned tail and ran, sprinting out the door. But a woman sitting not far from the exit grabbed a small tray, and chucked it at the fake pistol packer. It struck him in the back of the head, and he fell into the sand outside, knocked out. 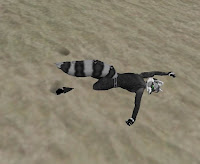 The bandit was soon picked up by the SLPD, and charged with Second Degree Griefing, “Sly Cooper he wasn’t.”