A Brief History of Second Life 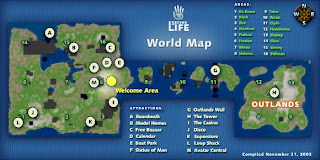 Tateru Nino wrote an interesting series of articles on Second Life's history, from it's beginnings as "the rig" in the Linden Lab research department around 2001 to 2007.

Having not really known Second Life until the final year (so far) of Tateru's description of it's history, it's early years are certainly an interesting comparison, notably about how small it was compared to now, not really taking off until 2005. She also stated that when it was about to be released online and an official name chosen, "Second Life" was not a popular choice with the Linden staff as a group, apparently preferring the working title of "Linden World." And why didn't Linden Lab adopt a new phrase to substitute "Our Word, Your Rules" a few years ago? They did select one, but as it turned out another company was using it.

Source: Massively
Posted by Bixyl Shuftan at 6:01 AM