Recently, after months of being packed away, a popular club was put back into service: Club Zero Gravity. On May 31, 2010 Nydia Tungsten announced it’s return, much to the joy of fans whom last year and before enjoyed dancing away in the space club.

Club Zero Gravity is not a new club, having had a history lasting a few years and a few incarnations. Shockwave Yarearch built the club, which was soon owned by Spectra Ninetails. Under Ranchan Weidman, the club took on a form much like it is today. Today with a few modifications, it is jointly owned by noted DJ Nydia Tungsten and Elphias Kojishi, the owner of Purrfection Estates in which the club flies overhead. 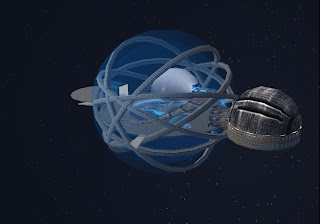 Ranchan called Zero Gravity, “One of the more open space clubs that I've seen or been to.” From outside, it appears like a station somewhere in outer space. On one end is the old landing platform, which in the past was where people teleported in. At the other end is the Zero Gravity Shop, which is where people teleport into currently. It offers some goods for sale, including some science-fiction items.

The main section is the social area, which naturally is where at the club spend most of their time in. Built for a unique look, the dance area has no real outer walls, but a force field around bands of metal curving around the interior. The DJ stand is on the edge of a large metallic disk in the middle, given a high-tech near-transparent look. Around the stand are a few floating platforms for poledancers, including one “zero-gravity” one built to hang upside down. The DJ and dancers have coin stack tip jars that get taller as the amount of money tip grows. Spokes under the station’s glass floor slowly rotate around. There is even a small alien-looking “pet” bounding from place to place, breaking the stillness for anyone dropping in between parties.

The most recent addition to the club is the small “private room” at the top, accessible by a metallic ramp from the dance floor. It was built intended for use between parties, either people just sitting around and chatting, or a dancer performing on the pole there for a small private party. All of these features combined result is a high-tech look that reminds one of how a space-age dance floor in a science-fiction movie would appear. 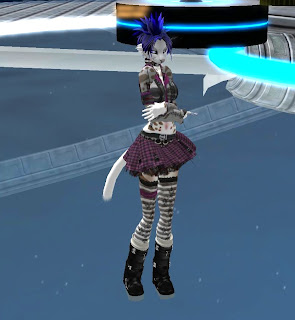 Nydia Tungsten was busy with Relay for Life fundraising, so left it up to co-owner Elphias Kojishi to meet up with Second Life Newser to discuss the new Club Zero Gravity. Bringing up Nydia being more familiar with the audience and sometimes thought of as the sole owner, "It's a popular misconception, mostly because I sit in the background, but I along with Miss Tungsten own Club Zero. People just don't see a lot of me around here because Miss Tungsten works so hard (giggle). She's epic. I asked Miss Tungsten to either build (a club) or find one, and I would finance it. And she came up with Club Zero.”

Elphias had first heard about Second Life through another online world: Furcadia, “A friend of mine played both and told me to try it. I did and was hooked (grin). I skipped through Orientation Island ... jumped right to the main grid. I ended up by trying to make a home for myself, me and my mate ... I built up a wonderful network of family and friends. ... I got sick of renting land from others ... So I wanted my own sim.”

Purrfection Estates was also the first sim she bought, “I’m kind of new at this. ... only a few months old. I bought it from the previous owner who didn’t want it any more. ... There were people here, but they chose to vacate for various reasons. The sim was kind of needing a club. ... My staff and I all work very hard to make this a special place, even though we don’t have tons of money. We do what we can. (smile)” 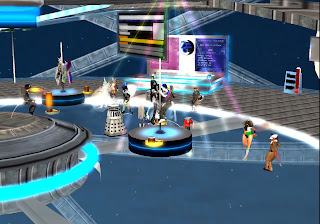 Elphias had first heard of Club Zero only about a week before Nydia declared it open, “We had started another club down below, but Miss Tungsten thought this one was better. She was right (big grin).” She was very pleased with the attendance on it’s opening night, “I was overjoyed. Finally the sim was being used for what I had hoped for. .. and we even have a mall.”

Purrfection Estates itself has other sci-fi features. “We are part of the HoO/Novatech Tardis network too,” Elphias, an admitted “Dr Who geek” explained, “Hands of Omega, builds these Tardises, they act as teleporters to anywhere that has build rights. They’re really handy for in sim travel and intersim travel.” She went on to say those living in her sim had access to special rooms in the Tardis, notably a movie theater. Purrfection is also connected to the Stargate network , “Basically it does the same thing as the Tardis does. It just looks kinda cooler (grin). ... we wanted to make our sim fun.” The sim also features water fun such as boating, swimming, and 7Seas fishing.

Elphias plans on having a tail sale (bachelor/bachelorette auction to those not familiar with furry and neko areas) to raise funds for the sim, “rest assured it will be something to attend. (grin)”

So for a unique club with a space-age theme, rocket away to Club Zero Gravity. And if you feel like exploring around after the party, take a Tardis down to Purrfection.