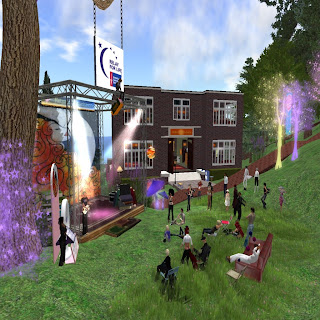 As part of their week-long Summer Faire, Chilbo hosted a Relay for Life event, their RFL Storytellers’ Benefit Concert. On a stage set up next to the fairgrounds built for the event at the Chilbo sim, a number of singers, poets, and other talent appeared for the charity show, including Crap Mariner and Lance Rembrandt.

Kristine Kristan opened the event at 2PM at the stage covered with oversized books. She was followed by Hazideon Zarco at 2:15, then around 3 PM came “Escape Unplugged.” At 3:15 PM came Beth Odets, whom sang as she played her violin. 4 PM had singer Matthew Perreault, whom got a bit of applause when he sang a song, “In praise of nerds.” 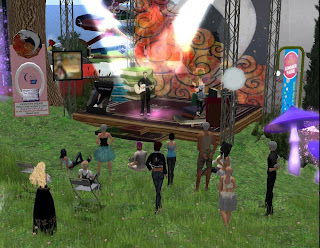 At 4:45 came Crap Mariner, whom did a comedy routine, whom apologized for the show’s technical difficulties at the time, “I believe that should be the new motto of SL, ‘technical difficulties.’ “ Following him were singers Starflower Orbit, Chibi Lexenstar, then Kacy Jinx. At around 6 PM was Klabbes Northmead, who read a little poetry. When he finished, Chibi Lexenstar reminded, “For all the poets in the house, Chilbo has a Poetry Bench program where you can donate your poems to decorate a bench. There's a sample by the library entrance to the left of the stage.” Strum Diesel was next, singing songs by guitar, such as one of broken romance, “You Could Have Counted on Me,” political, “Cremated Care,” and one based on some of his opinions about the music industry, “The Loudness War.” 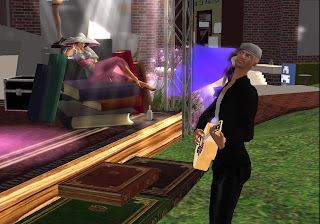 Following Strum was poet Mary Wickentower. At 7 PM near the end of the event came singer Lance Rembrandt. He cheerfully greeted the audience, including some fans of his who showed up about then, “It’s been a wonderful evening. For those who didn’t hear earlier, a round of thanks for all the poets, all the musicians ...the reason they put in this event ... RFL is such a great outfit. ... RFL is the foundation looking for a cure. ” Wrapping up the event was Winston Dufaux, whom read a poem about “neon bras,” and another “Ryan Ascends” about jealousy.

Chilbo resident Alleara Snoodle announced at 7:43 that 30,000 Lindens (over $100), had been raised that night, “Kristine did a really great thing in planning, building and organizing this entire event. Woohooo! Like all her projects it is just great an inspiring. Go Kristine! GO REDHEADS! GO RELAY!!!!”

The Summer Faire at Chilbo will continue until Sunday, including sailing lessons, snail races, a parade, and Friday from 7-8PM a RFL concert.