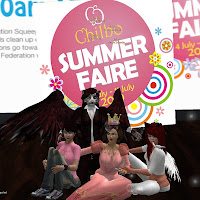 For about a week, the residents of Chilbo held their Summer Faire, which included a number of amusements, and events such as the Relay for Life fundraiser. On Sunday at 10 AM, the final events started.First came the parade, complete with at least one float. Besides locals such as Fleep Tuque and Alleara Snoodle, there were others from outside the community who took part such as RacerX Gullwing of the snail races. After the parade, they celebrated the close of their faire with a party, with a "Faire-Well Fund-Raising Block Party." Partnering with Operation Squeegee, they raised funds to help cleanup efforts on the Gulf Coast. 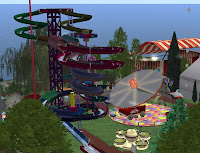 It was the "end of a wonderful week in Chilbo."