On July 10, the Passionate Redheads RFL group held their Third Annual Gala. The event took place in the Southern Colorado sim, high above the ground, in a clearing in a clearing in the middle of a forest at night. The theme of the gala was clearly fantasy. 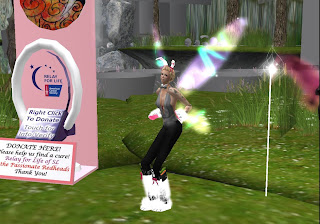 Join us for a Magical night... in the Enchanted Forest! Come dressed as mystical creatures (fairies, elven, hobbits and more) or maybe even a fairy princess or prince. We will dance the night away in the center of the forest, with fairy lights and fireflies to add that special glow to the night.

The Gala was actually held twice that day. The afternoon event was from Noon SL time to about 3 PM. At 6 PM SL time, the evening gala took place, lasting to after 8 PM. There was a number of outfits to go with the fantasy theme, from knights and kings, to princesses and noblewomen, to faire folk. The light in the dance area remained at Midnight, the light provided by lamps. A large amount of cash was raised, one making a 5,000 Linden donation to the kiosk. 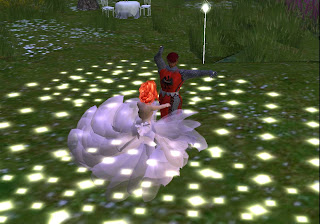 There was much music, including “Wear Your Love Like Heaven,” which Redhead officer Sabine McGettigan called “the team song.” Redhead leader Daaneth Kivioq had a surprise for Sabine, calling the DJ to request a certain song, then it began playing, “Happy birthday to you ...” And everyone began wishing Sabine happy birthday and well wishes.

Besides the Gala, the Redheads also held their Silent Auction, “Many residents have been very generous and donated wonderful things to be auctioned off.” It began at noon and continued for the rest of the day.

Just before 8PM SL time, Sabine made an announcement:

You, the Passionate, have raised L$1466534 for Relay for the Relay! What a beautiful effort! I'm so very proud of us! If we can raise L$ 2 Million, Daaneth will Relay in a fluffy pink dress next weekend! Can we do it? I think we can!

Will Daaneth have to undergo such an indignity? He just might.

With one more week until The Walk starts on July 17th, the Passionate Redheads, and other teams, are determined to break records.