On July 23rd 2010, I was able to attend the broadcast of Science Friday in Second Life. From about 10AM to Noon SL time (1-3PM EST), the National Public Radio program Science Friday is broadcast in the north west corner of the Science School sim, in the Sci-Lands, which includes places such as the International Space Museum and the NOAA area.

The setup for the show was fairly simple, a couple blocks with its name, a blackboard, a chair next to the blackboard, and during shows numerous chairs in the air. This is not lag hiding stands under the chairs. To get up and into the circle of chairs, one has to sit on the chair on the ground, and it promptly flies up into the air, a copy left behind in it’s place. In the middle was a kitty tip jar, asking for donations. 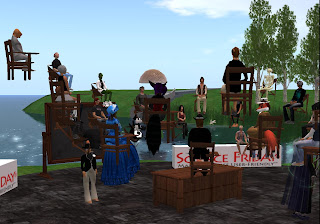 This show talked about a variety of subjects. Their first subject was “How Pleasure Works,” which they talked about why people consider things pleasing, including why some people apparently like being scared or having pain inflicted, which got some chuckles among the audience. They also talked about the race nearly a century ago to see whom would be the first man to the South Pole between Amundsen and Scott. Next was a robot fish which could get other fish to follow it. The second hour of the program talked about the latest news on AIDS. There was also a discussion about the geology behind oil fields, why were some more productive? Finally, they talked about the climate scientist Stephen Schneider whom died that week.

Science Friday has a history in Second Life. In the past, the program host, Ira Flatow, appeared in his own avatar at the set. Residents could IM him questions about the topic discussed. But in late May, I was told by a resident that the broadcasts in the Metaverse would soon be ending, one of the reasons being the cost of the virtual land. But as it turned out, it was not the end. Others stepped in to give the Science Friday set a new home. Kat2 Kit provided the tip jar to collect donations.