It's not every day most in Second Life have a chance to go to a mermaid party. And when the RFL group Passionate Redheads decided to take their antics "under the sea" on Tuesday July 13th, they were joined by a number of residents. Some of whom had various mermaid or merman avatars. Others just brought scuba gear, or just held their breath until they could get to an air space under the rocks. 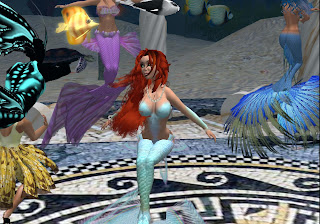 The party went on for two hours from 5 PM SL time to 7. During this time, Redhead Dusk Griswold caused a brief amount of mock panic when the bunnygirl showed up with a fishing pole, "She's gonna fish us!" "I think Dusk wants to catch a man." But instead she caught a few 7Seas fish, then put the rod away and joined in the swimming dances.

With just a few days until the RFL Walk, the Passionate Redheads are third among the teams in Second Life in raising cash (first is Circle of Life), and Redhead leader Sabine McGettigan has been the second most successful individual fundraiser with $520 US dollars, passing her goal of $500.