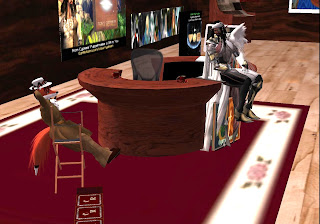 On Monday evening at 7 PM SL time, I made an appearance on the “When Worlds Collide” talk show, hosted by Cypress Rosewood. Cypress is a musician in Second Life, playing his unique style in a tall elven avatar, but he also does this talk show once a week. His normal routine, first he plays another musician’s music or have the musician play it himself. Then he reads an article about Second Life or the Internet in general. And finally, interviewing his guests.

Cypress does his show on a set in front of an audience in the Native Lands sim. It’s also broadcasted on Radio Free Nashville 107.1 WRFN-LP (http://www.radiofreenashville.org/). It’s a “100-watt station” covering the Nashville Tennessee suburb of Pasquo. The show runs from 9 to 10 PM local time.

I can’t remember whose music was playing, but the article was from the “Guardian” about how computers and the Internet may be rewiring people’s brains. Then it was my turn. Cypress was polite and friendly as an interviewer, the questions ranging from how I got here, to how I got to be an online journalist, to some of what I’ve covered. All in all, I would say things went well despite my having “a voice for newspapers,” and I got to mention a few certain people and places (notably the reporters here).

Cypress has had some hard luck in recent months. First a robber broke into his home, stealing thousands of dollars worth of goods. Then came the Nashville floods, which hit both his home and business. Despite these blows, Cypress has come back and continues to perform in these two different roles in the media.