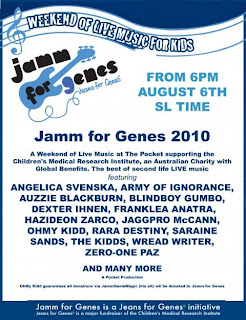 From Friday August 6PM SL time to Midnight on Saturday, “The Pocket” club hosted the “Jamm for Jeans” marathon live music event. “Jamm for Genes 2010 at The Pocket!” Delinda Dyrssen, the owner of the Australian club advertised, “Come on down for 30 hours of SL's best musicians and singers all performing for a common cause, Genes! here at The Pocket! ”

"’Jamm for Genes’ is part of the annual ‘Jeans for Genes’ fundraiser for the Children's Medical Research Institute, an Australian charity with global benefits," singer Cellandra Zon explained, “ ‘Jamm for Genes’ is all about live music raising money, for research into cell biology that helps with both prevention and cure of childhood, congenital and genetic diseases.” 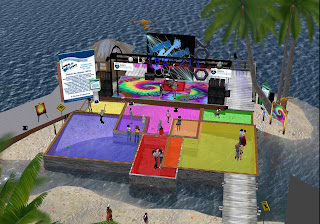 The day and a quarter event offered a variety of singers in Second Life. Besides Cellandra Zon, there were Truelie Telling, Lyn Carlberg, OhMy Kidd, and many more. There was also a wide variety of styles. At one point, OhMy played as part of a pop music band, The Kidds. ZeroOne Paz offered more relaxing, ambient, music with his xylophone. Alienspeaking, whom spoke in a voice that sounded like “Alvin and the Chipmunks,” had a strange series of odd tunes that one might describe as an acquired taste. Delinda commented, “Someone in Second Life once told me that a venue cant mix rock and roll next to ambiant or country or whatever ... but you know what, music is music. It’s all good! 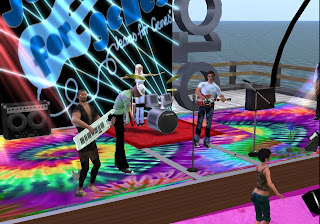 On Saturday at 9PM SL time, “Jamm” finally reached the 200,000 Linden mark. The final tally at the end was 241,399 Lindens, with a last second 1000 L donation arriving just in time. Delinda felt the event had the potential to be higher, “definately see the economic impact. Three years ago I did a 36-hour non-stop and by now we had 400,000. That was Unday for thrombosis research. And AngelAid we did two 8 hour days. We hit over 1 million in 16 hours. That was three years ago, though. And this event always falls shortly after Relay for Life, and people are burned out.”

Still, a quarter million Lindens had been raised for genetic research. Another example of Second Life aiding people in real life.

Source: Afk - But Not For Long