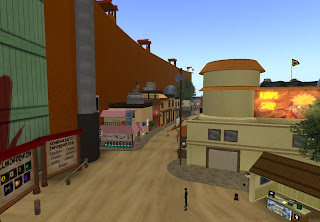 About two years ago for Second Life Newspaper, I wrote about the Naruto roleplay at the Kohona "Hidden Leaf" Village in the Shinobi sim. It was an RP with a sizeable group, where they could practice combat in and out of the game, or just hang out in places on neutral ground. There was also a large martial arts shopping area that catered to both those in and out of the area.

Recently I heard the Roleplay and Konoha were finally coming to a close, shown in a notecard passed to me. 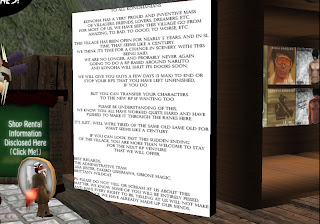 TO all Konohanians. Konoha has a very proud and inventive mass of villagers, friends, lovers, dreamers, etc. For most of us, we have seen this Village go from amazing, to bad, to good, to worse, etc. This village has been open for nearly 5 years, and in SL time, that seems like a century. We think its time for a change in scenery.

With this being said, we are no longer, and probably never again going to do a RP based around Naruto, And Konoha will shut its doors soon, we will give you guys a few days (3 max) to end or stop your RP's that you have left unfinished, if you do. But you can transfer your Characters to the new RP if wanting too.

Please be understanding of this, we know you all have worked quite hard and have pushed to make it through the ranks here. It's just ... we'll we're tired of the same old same old for what seems like a century.

If you can look past this sudden ending of the village, you are more than welcome to stay for the next RP venture that we will offer.

PS: PLEASE Do not yell or scream at us about this matter. We know some of you will be entirely pissed, and have every right to be. Yelling at us will not make a difference, we have already made up our minds, and have been planning this for a matter of months. If you choose to yell at any of us, then you might be subjected to temporary ban, or in serious cases, permanently banned.