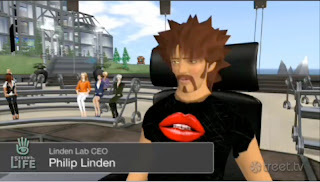 On July 30th at 10 AM SL time, Linden Lab CEO Philip Linden (Philip Rosedale in real life) held an inworld meeting with a small audience whom had applied well in advance for the limited seating, randomly chosen through a lottery according to the Linden blog. Most everyone who saw it did so through video viewing through Treet.tv, either live or archived. The event took place at the Linden Estate Services sim, and was moderated by Wallace Linden, who stood out in what looked like a robotic pirate avatar. Also there was Chief Operations Officer BK Linden (Bob Komin in real life).

Philip Linden spent the first half hour giving a presentation. He noted a few points by critics, “Second Life ... it was big in 2006, but where are they today?” He seemed to feel some were just waiting for Second Life to go under, it’s continued existence an annoyance, “it just doesn’t go away.” He then talked about “tearing down the walls” between Linden Labs and the users of Second Life.

Then he brought up the new slogan for the virtual world, “fast, easy, fun. These words capture what Second Life must be as a user experience.” Philip also talked about going “back to basics." These were the two catch-phrases of the meeting.

Philip talked about “winning back the lead” in their technical edge, though didn’t specify as whom this lead may have been lost to. He wanted to increase the rate of community feedback, “our plans and ... our source code will always be visible to you as we work on the product.”

He also held fast on Linden Labs continuing to work on Viewer 2, but acknowledged, “we have a big challenge. I know many people have been frustrated. Under it’s 2.0 release, ... we seem to have created a product that failed to satisfy ... any one group of users.” He stated it didn’t have all of the desired features for new users and lacked those familiar to older ones. He appealed for resident help in improving the viewer, inviting the open source community.

He emphasized it was his goal to grow the economy of Second Life, ““I’m not suggesting Second Life is all about people making money, but ...” He felt the success of the content creator was the “key driver” to the virtual economy. To help them succeed, For the near term, he wanted to have SL “optimizing the process” the residents get their goods. He admitted Search needs work, and told the audience they’ve already started fixing it. Of the process of getting and using virtual goods, he wanted an alternative to sandbox regions, so residents wouldn’t have to port from a store to another sim and rezz a box on the ground there to get the contents.

He stated he would be looking for an alternative to newcomers starting out at welcome areas, bringing them directly to a featured area. Of Second Life Enterprise, Linden Lab was suspending it, “stopping work on a behind the firewall solution.” He talked about wanting to create a better offworld shopping experience, “I know there’s a debate inworld” and insisted shopping on websites and inworld shopping could complement one another. Going back to lag, he brought of region crossing and how it affects sim performance, “we hear you, I couldn’t agree more,” giving an example of how it can interfere with sailing. Of mesh and it’s impact, “we’re very excited about it ... it’s potential on the economy.” But he stated they were being careful, so it would have no impact on lag, or actually help reduce it. Another goal of his, making Second Life work better for the disabled. He thought it could be done with the help of opensource development.

Before answering questions, he finally stated he was giving into those who complained his avatar look was shabby, “I’m committed to getting a makeover for my avatar,” joking that it was “negatively affecting the reputation” of those in clothing and avatar work.

The rest of the time was spent answering some questions. Among them, “If you could do anything over again ...?” Philip at first answered, “Hard to say,” then later felt they could “have been more honest and open” about fixing bugs earlier in SL. “What blogs do you read on a daily basis?” “... some of the most popular ones. I don’t want to call attention to any particular one.”

One question was more clearly answered within hours by the fashion industry than Philip, “How does fast, easy, and fun affect businesses?” It wasn’t long before virtual clothesmakers began making women's’ T-shirts with the phrase “Fast, Fun, and Easy.” No word from Philip on if anyone from the Lab anticipated this.