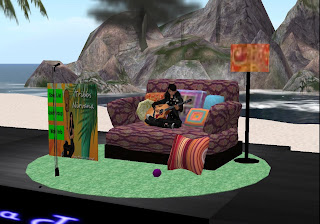 On Sunday August 8th from 3PM SL time to about 1 AM, a music benefit was held to raise funds for people affected by the BP oil spill in the Gulf of Mexico. The money was sent directly to the United Way, whom would them aid those in need. DJs performed from 3 to 5 PM and 10 PM to about Midnight SL time. Live musicians performed the rest of the times. The event took place at the Java Serenity sim.

By coincidence or design, the stage and floor were set up at the beach shore, the same environment shown on some of the images on television news. 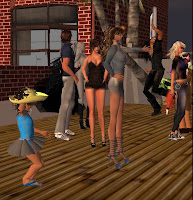 Dropping in at 6 PM, Tribbs Nirvana was playing her guitar for the audience. She played songs such as “Starfish and Coffee.” She also made a few occasional comments, “so many people lost their livelihood and their income because of the spill ... BP and the government are no help ... keeping Americans alive and well.” She was followed by Grateful Stryker, whom also strummed his guitar for the crowd.

Chordslinger Carstensz, who helped organize the fundraiser, told me the singers were in the following order, “Mance Moonwall, Tribbs Nirvana, Grateful Stryker, Jasher Faith, ChelseaMarie Noel, and Jana Jana Kyomoon. She had a song of her own, “Who’s going to clean up BP” played by the DJs. 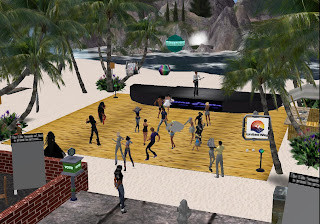 “Remember everyone, the devastation created by the BP oil leak put so many families out of their family business and have no assistance! ... Please donate to help them!”

A few days later, Chordslinger told of getting a message from Kurt Cassady, an SL resident affected by the spill, very appreciative of the fundraiser, “... thank you for being a part of it. Although I have been partially reimbursed by BP through claims, they only give about 50% of what was lost. Many still haven’t received anything from them….. Anyways, glad some peeps in Second Life still care.”

Source: Afk, But Not For Long