One can find just about any kind of accessory for your avatar in Second Life, though some things can be harder to find than others. One kind of item that some residents complain they can’t seem to find are ethnic avatars. Highly detailed dark skins can be even harder to come across. Among the places that does sell them is Tellaq Avatar Creations. 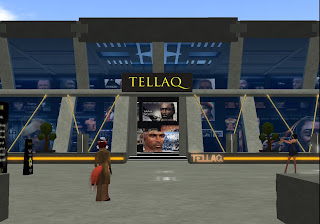 Tellaq is really two stores, one for male avatars, and one on the opposite side of the small clearing between them for female. The men's’ building has a much larger selection of skins. Most of the skins are black, but there are some white, and one Asian. Both stores have a lucky chair, giving people an opportunity to win one of the skins for free.

The store is owned by Tellaq Guardian. Talking to him earlier, he called himself a graphics designer in real-life. Why he chose that particular first name, he did it as a yuk, “ ‘Tellaq’ means a cleaner guy in a Turkish bath. He cleans the customers (grin), helping them to clean their shoulders and (places on) their back where they can’t reach.” He first began making skins several months after entering Second Life. His main reason for creating the business, “I couldn’t find any good black skins for myself. As you can see in the store, there are many Afro skins.” 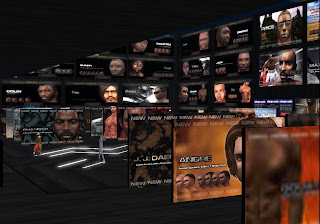 The men's’ store was packed with skins, dozens of them, all over the walls and on panels on the ground. Each were given names, such as “Eddie,””Pier,” “Ronald,” and others. There were a few accessories for sale, such as gold chains and tattoos, but the store was almost all skins.

While taking a look at the place, I ran into a Damian Drammond. He praised Tellaq for his work, “He does the best skins in Second Life. If you want realism, this is the place to come. He comes up with a new skin every day. He needs a bigger shop (laughter).” I thought he worked for him at first, but it turned out he didn’t. “I do avatar makeovers for guys,” he told me, “But I’m a sucker, help out the newbie population. I usually do ‘em for free (laughter).” Because of the detail of the skins, he was sending people here, “I think he has about 60 -70 skins in here alone. I know I own about 10-15. I am hooked on his skins.” He felt several were particularly good, but the “Eric” was his favorite, “he’s realistic enough but not over the top.” 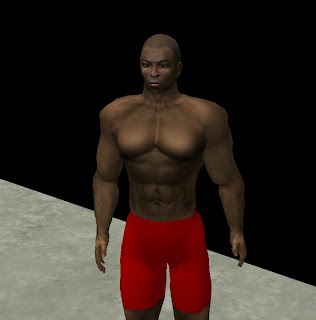 Checking the building for the females, it had much less of a variety, just about a dozen, “I think he needs to start looking after the women now. ... He could make a bomb if he concentrated on the girls.” To help fill the wall space, there were a number of accessories and clothes up for sale here, “not sure about the clothes up here. ... I think skins and tatts are his game.”

So if you want a quality ethnic look, Tellaq is one place you will want to check out, or as someone put it, “If you want to look good in black, head to Tellaq.”

“I like what he does, and we need more of it. His customer service is second to none.”