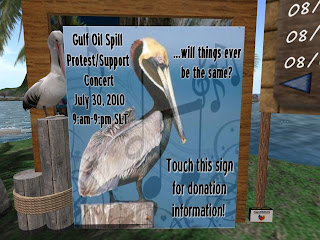 On Friday July 30th, there was a live music event at in the Bali Bali sim, at “Gwampa's Dance Kamp.” The concert was to both be a protest of the Gulf of Mexico oil spill by British Petroleum, and to raise awareness for charities providing relief. From 9 AM to 9 PM SL time, a number of musicians, including CraigLyons Writer and Wolfie Moonshadow played for the audience.

I dropped in for a little while during Edward Kyomoon’s performance. Although the nighttime crowd hadn’t arrived yet, the event still had a good attendance number, with Edward’s fans and others cheering and whooping it up. Some of the surrounding region was also an attraction, such as the wreckage of a wooden schooner propped up with the bow pointed up 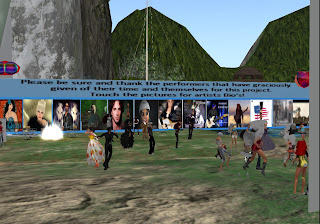 Not all of the moments were happy ones. Someone booed BP at one point, and this was followed by other people jeering the energy corporation. A couple people suggested that they tone down the boos, reminding the others what powered their automobiles. But the jeers continued. It wasn’t just British Petroleum that was the target of the audience. US President Obama was also subject to boos, accused of doing nothing about the oil spill but parading for the camera. 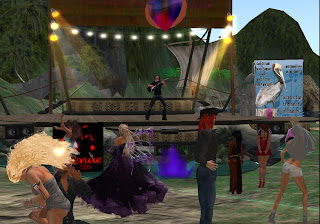 The charities listed included the National Wildlife Federation, Audobon, and The Nature Conservancy.