Qarl Linden: He Will Be Missed

On August 4, 2010, Linden Labs killed off Qarl Linden. As the word spread quickly through SL and RL, residents were shocked and sadden by the departure of such a skilled and well-liked creator. A texture was sent to many residents, including this reporter, and posted throughout the SL blogger world, protesting the decision and demanding an explanation. So far, no one from Linden Labs has responded.

Even Qarl himself was shocked at the decision, especially since he had gotten glowing job performance reviews. As he wrote on his blog, “honestly, I’m completely baffled at the decision, as are all my coworkers (and my boss, and…)”. Check out the details at his blog: http://www.qarl.com/qLab/?p=64.

In real life Qarl was Karl Stiefvater, a multi-talented programmer. His credentials include two “Matrix” and “300” movies. His background and professional history was very broad. Most importantly, he loved Second Life and its possibilities. “SL is the coolest thing on the planet - the world we’ve all built is literally incredible - beyond belief,” he wrote on his blog. 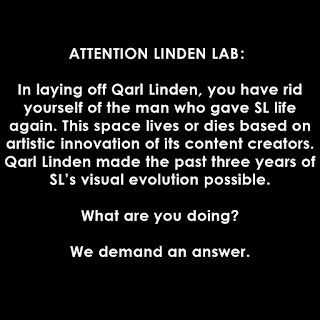 I talked with Samantha Glume, CEO of Samantha Glume Enterprises, who builds communities and creates worlds with an emphasis on sci-fi. Like many creative people, she knew Qarl best through his work on sculpts, Jira and other projects. She described him as a talented programmer who had a spotless reputation.

His departure has had a devasting effect on the morale in SL among creators. Glume characterized the news of his removal as demoralizing. Because he was one of their best programmers, she said the Linden decision “just makes no sense.”

Qarl was working on mesh compatibility, which Glume said will enable the sci-fi community to build ships that look realistic without requiring thousands of prims. His work on sculpts was invaluable because sculpts are what make SL look and feel real. He was also working on the shadow engine, which will allow things in SL to cast a shadow, just like objects do in RL. His departure will be a huge loss to the creative community because, as Glume explained, he was responsible for actually building the systems.

“He will be greatly missed,” she said.