Club Zero Gravity, Illusions, Team Up For a Month, Offer Beachhouse in Contest

Nydia also announced the two clubs were having a contest. A beach house in Purrfection worth about 12,000 Lindens would be given rent free to the winner for a month, “We will be giving it away on the first Saturday of September until the the 4th of October. If you would like a chance to win, be available on that Saturday.” The contest will be held at Club Zero Gravity on Saturday September 4rth, and the winner chosen at 1:45 PM SL time. 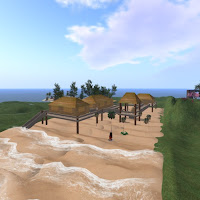 The beach house is four rooms in size, and has a teleport to a three bedroom skybox high above, “the home is open if you would like to look around it, as is the the skybox, and you are welcome to do so.”

Club Zero Gravity regularly has parties on Tuesdays and Thursdays at 6 PM SL time, and occasional parties on Saturday. Illusions had it’s Grand Opening on Friday, August 21st. Rhayne Tungsten, the owner and Nydia's SL sister, was the DJ for the crowd that night.