Bruce Boxleitner to be Interviewed on Krypton Radio 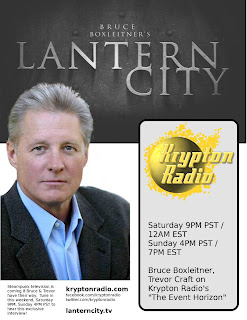 Krypton Radio, which broadcasts in the Steelhead Estates and other places in Second Life, as well as outside the Grid, will be having a guest known to science fiction fans on one of it's shows. This Saturday on "The Event Horizon" radio show, Bruce Boxleitner of Babylon 5 and Tron fame will made a guest appearance. Boxleitner has a new show in development, Lantern City, a Steampunk series.

Fuzzball Ortega, who is known on Krypton Radio as personality Gary DaBaum, felt that Second Life's large population of steampunk fans, would take great interest about this week's topic.

The Event Horizon airs every Satruday night at 9:00 PM SLT. It is a panel discussion show with writers, artists, filmmakers and others in the science fiction, fantasy, comic book and gaming world.

One can listen in at Krypton Radio here: http://listento.kryptonradio.com:8000 .

For more information on Lantern City, click here: http://www.lanterncitytv.com/ . One can also watch this trailer on youtube: http://www.youtube.com/watch?v=5TzTT_gYMyw .
Posted by Bixyl Shuftan at 6:01 AM