The Relay For Life 2013 Kickoff 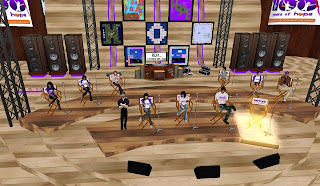 On Saturday morning at 10AM SL time, the Relay For Life in Second Life began their 2013 fundraising season. In the four sim area north of the American Cancer Society sim, many avatars gathered in the intersection. Attendance was over 180 in the four combined at times. For those who couldn't get on, the event was broadcasted live on T1 Radio. Much of the Committee was seated on stage, with maps of previous Relay tracks on the wall behind them.

The Relay Committee addressed the enthusiastic crowd. They talked about their past success in the several years the Relay For Life has run in Second Life, mentioning that the total amount of cash raised was over a million and a half dollars, and expected the two million dollar mark to be reached this year. At one point one of the Committee talked about how some people expressed fear and suspicion about having friendships with people online, talking about "the stereotype of online romances," and how they were poked fun at in ways such as a movie where the producers claimed to expose "the truth." In the end, he thanked the crowd for their effort, "from a digital construct in a magical land, thank you for all you do."

Then came a cancer survivor, Lovencia,  giving her story. With her diagnosis came a hysterectomy, ending her hopes of becoming a mother. She hadn't heard of Second Life until six months afterwards, "I wish I had the friends then that I have here." 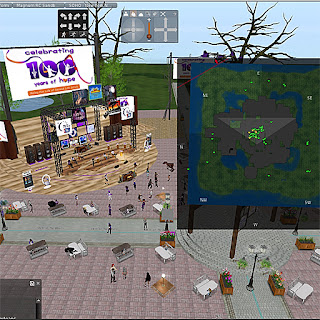 With all the avatars, performance on my viewer was less than idea. Only a small number of the avatars rezzed completely during the event. And a number of times the viewer froze, followed sometimes by the "thunk" noise that announced my disconnection. But this reporter persisted, and so did the Relayers. There were a number there that I recognized, the black unicorn Avariel Falcon, six inch avatar Lomgren Smalls whom was now leading his own team "Micro Madness," latex-dressed DJ Madonna Milena, Bain Finch in his cowboy hat, Vic Morrington in his satyr avatar, Dwen Dooley whom was the subject of a few "Dooley noted" jokes, Trader Whiplash, and others.

Besides the lag, there was one minor disruption in the form of a couple protesters who shouted against the idea of a "Fashion For Life" event. No one seemed to pay attention to them. 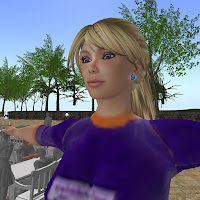 Near the close, the speaker told the crowd, "Thank you for being the determined foe of cancer that your are ... we hand this relay over to our teams." Then came a surprise. MamaP Beerbaum whom was known for her hard work in the past was inducted by the Committee into the Relay for Life "Hall of Honor." A number of people in the crowd responded with "We love Mama" gestures that had been passed around, and T1 Radio played a song in her honor, "When you're good to Mama, Mama's good to you." MamaP was at a loss for words, "My goodness. I am not an easy one to pull a surprise on. … I don't know what to say but thank you very much."

Staff planner Stingray Raymaker then read the names of the Relay teams, one at a time. One though had the name "Aliens Love Ta-Tas Too," of which he commented in chat, "Can you believe they made me say that?" Of which the crowd responded with a number of snickers. The Steelhead Salmons of the Steelhead Estates were number 18. Micro Madness and Sunbeamers, the teams to replace the Passionate Redheads, were 60 and 6 respectively. Following the list of teams, came songs such as "Go the Distance," "We Are the Champions," "We Are Family," and "We are the World."

With the Kickoff coming to an end, some people headed south to the Fashion For Life sims. Others went to the nearby "Cafe Du Kickoff" and the street area that went around the outer area of the four sims. Of the latter, Bain Finch commented, "OK I have to ask. How many of you notice these kick off sims has a road that looks like a Relay Track? And how many of you HAVE already made a few  laps already?" Some teams such as the "Cure Chasers" and "Dr. Who Fans" in Second Life had claimed a few of the buildings as shops. 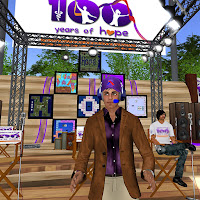 And others continued to hand around and party, dance around to the music. This reporter had to leave after a while, but upon returning late that night at around 9PM found a small party going on courtesy of DJ Madonna. And the following day in Relay chat came an announcement from Bain Finch, "Guess what folks, RFL of SL just broke through the $100,000 mark." The response was a number of cheers, Madonna commenting, "Wow! Nice kickoff weekend. I never thought I'd see anything like this." "Amazing weekend, and another major page in the RFL of SL history books."

And so, the 2013 "100 Years of Hope" season of the Relay for Life in Second Life had begun. There was a big event to go to, the Fashion For Life. And teams were launching smaller events, such as the Steelhead Salmons' kickoff. The Relayers were hopeful for another successful year.

For those interested, a recording of the Kickoff can be found here: https://archive.org/details/2013_SL_Relay_for_Life_Opening_Ceremony. More pictures can be found on Flickr Here: http://www.flickr.com/search/?q=RFL%202013%20Kickoff.

Pictures from DrFran Babcock
Posted by Bixyl Shuftan at 6:00 AM