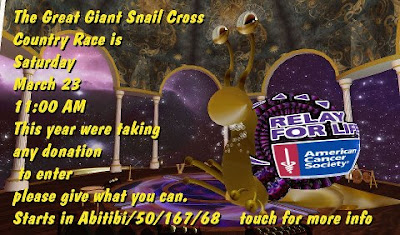 On Saturday March 23 at 11AM SL time, the first of this year's Giant Snail Cross-Country Races will take place on the mainland area officially known as Sansaria, starting in the Abitibi sim at (50, 167, 2). The races are organized and run by RacerX Gullwing and his team. He estimated the racetrack covers about 45 sims.

On the Snail Race's Facebook page, RacerX wrote, that the race was set up "to raise money for the American Cancer Society. Every penny collected goes to them. ... We'd like everyone to pay 1,000 L, but if that's not in your budget then give what you can. All are welcome. The more (who come), the crazier it gets."

"Were going to have a lot of fun trying to get as many giant snails as we can to run the race. (There are) no starting position scarfs this year. Just put your money in the kiosk here." He invited people to get a free giant snail avatar, personalize it, and then show up at the race, "It will be laggy at first, (and) many will crash. But just relog and try to pick up from where you left off. There is a hud you can wear that will roughly tell you where you are, and it (should) tell you if you get off the path."

RacerX wrote there will be four or five of these marathon races this year, no more than once a month, starting at different places across the Second Life mainland.