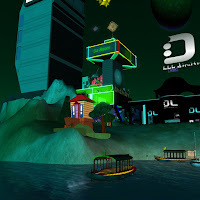 With the tenth anniversary of Second Life a few months away, DrFran Babcock was interested in what had become of the first places on the Grid. The first of the firsts she wrote about was the place the late Lalo Telling called, "The Orgin Point - The Anchor of the Grid" of the early Second Life: Da Boom. DrFran takes a look at the nearly decade-old sim, and what it has to offer visitors.

Read more in Places.
Posted by Bixyl Shuftan at 6:05 AM