Oh boy! I just happened to be in world when the notification for Maestro Linden’s Office Hours was announced in one of my group chats. Luckily, I remembered that they take place on the Beta Grid, so I logged in there, and ran to the meeting place. I hopped on a treadmill that was left there conveniently and settled in to see what was new in the Second Life Server. In all honesty, I rarely understand half of what the brainy folks there are talking about, but it is the place to be if you want to learn about new features that are being rolled out in the upcoming viewers. 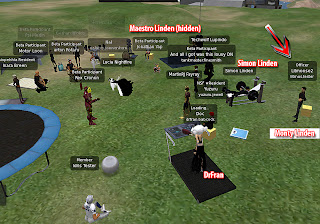 I had heard the term CHUI on some Second Life blogs, but didn’t know what it was, beyond thinking maybe it was something to eat (bad joke). However, Maestro, and in turn, Monty Linden explained that the Chat Hube User Interface was being unveiled in the Beta Viewer, and would become Prime Time if it checked out without too many bugs. I was excited to hear this news. The communications has always been a bit wonky on the viewer, and I was hoping that it would fix things up. Gone are the little “chiclets” on the top right that I was just getting used to. Instead, there is an all-in-one-place center for communication tasks and needs. Three areas have been affected by this change: The chat (Conversation Window), Friends List, and your Preferences. 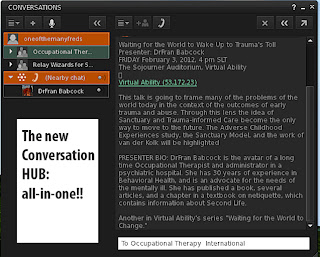 Everything related to interacting in Second Life is now found in this window. It is so much easier to see when a group or individual chat is going on because the name flashes in a bright orange. (see the picture) What’s really nice is that everything is logged, and you can easily see what you have missed. All member of each group appear on a drop down underneath each group. You can resize the window, and hide or show the members, and conversations. Even cooler, you can look at complete chat transcripts within the viewer without going to your desktop.
I can’t tell you how many IMs and Group Messages I have lost since the viewer changed from Viewer 1. I think it’s nice that Linden Lab is listening to feedback from users.

In addition, local chat is docked in this window, and those of you who prefer local chat in a different spot on your screen can quickly detach it and move it away, or pop it back in there by clicking on Bring it Back in the window!

Perhaps the biggest change here is that instead of busy, there is now a Do Not Disturb option. You will not lose anything, because once you leave Do Not Busy you will receive all IMs, notices, and inventory that was held while you were busy.
You can determine the level of importance of IMs and messages in the Chat Section of Preferences, too.

The buttons are now moved to the top for easier access. A block button is conveniently located for those pesky griefers. You can also access the chat logs of people on your friends list from the list itself. Quite a handy feature when you want to remember the name of a store or find a landmark given to you by a friend.

If you want to try the new features, go to the Second Life Webpage and download the Beta Viewer. When I was at the Office Hours most folks were saying that they didn’t like the new CHUI. I do like it so far, and I am of the opinion that some people just don’t like change. Change for the better is always good change. Each person has their own beliefs about what’s good and bad, but I have to try for myself to know. I hope you will try it as well, and let me know what you think.

DrFran Babcock
Posted by Bixyl Shuftan at 6:00 AM