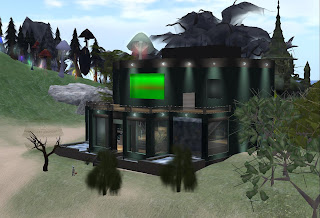 It was another day in late March at Podex, and as usual the tellers were doing business with clients as they dropped by. With winter on it's way out, not as many were buying winter gear. But this was a month of holidays, and with Saint Patricks Day and Easter, people were buying decorations. The Relay for Life fundraiser had also began. And to get the money for all of these, people were going to the Exchange for quick cash.

Between customers, the tellers talked about what they were and would be doing. One talked about how great the sights were at the Fashion For Life. Another planned to go to Easter services. Still another would be going to one of the egg hunts.

It was at this point a figure walked in. He wasn't dressed in much, just a pair of shorts. He carried a basket full of eggs and chocolate bunnies, and had a couple long ears on his head. But they were a different color than the coat on the rest of his body.

The tellers looked at him, "one finally saying Um, can we help you?" 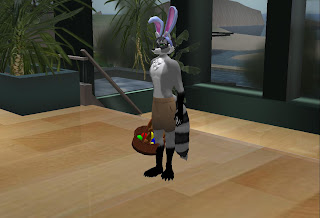 "Yes, I'm here on official duty to hide some Easter eggs, and this looks like a good spot. Would you mind if I hid a few around here?"

"You want to hide eggs here?"

"Yeah, including that one room, I believe you call it the vault."

"I think not." The teller then chucked a bit, "Your disguises are so lame, Clumsy Cooper, they're funny."

"Who's Clumsy? I'm just here to hide some eggs."

"Yeah, right. Just turn right around, and we won't call the cops on you."

"Okay, be that way!" Clumsy then pulled out one of the eggs, "These are actually bombs. Just had over the Lindens and no one gets hurt."

The teller laughed, "The only bomb is your act. We're calling the police/"

Clumsy reacted by taking the egg and hurling it at the teller. But it never hit him. Instead, it bounced off the counter, and beaned Clumsy right in the forehead, "Owwww!" 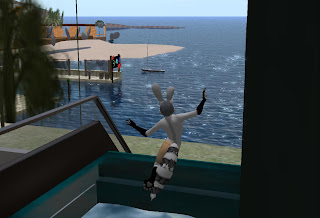 Realizing his ploy had failed, Clumsy then bolted from the exchange, He rushed down the steps, and down the beach to a nearby club. The SLPD were soon on the scene, but all they could find at the club was a discarded bunny ear headset. The unsuccessful thief had gotten away. Clumsy Cooper is currently wanted for attempted griefing.

But even if Clumsy Cooper's stunt had actually worked, there was no way he could have gotten away with any ill-gotten gains. “All our exchanges are done through electronic transfer,” a teller later explained, “He wouldn’t have walked away with a single Linden.”