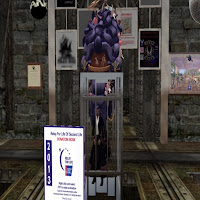 Well folks, the Steelhead Salmon's are at it again. They're taking no prisoners this time. Not even the Sheriff Fuzzball Ortega is safe. I hear through the grapevine that he's been locked up, and what do I find when I come to check it out? Why I see ole Fuzz locked up and a 4x4x6 cell. With bail set at 5000 Linden, and him still in his tiny little cell put on public display for all to laugh at, even throwing tomato's was authorized. I thought to offer a pair of scissors to help his "colorful" hairdo. Was digging them out till he started the Gangnam Style dance. Lucky for him, during the event here at Club Gearz, the locals all pitched together, raised the 5000L needed for his release. 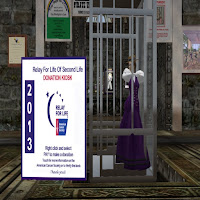 Upon his release I asked if there was anything he wanted to say and his reply was that this year, the Steelhead Salmons is more about FUNraising than FUNDraising. Also that it's good to be free.

Within a few short minutes of the Sheriff's release another poor soul, Annechen Lowey, was locked up over slander, and accusations of bad fashion sense. Cost of release: another 5000L. This reporter beginning to fear that she might soon get locked up and unfairly accused of a bogus crime decided to flee the scene and town before these random lock-up's got out of hand. I was later informed that the lock-up event was running till well into the night (9 pm SLT).